Backpacking in Sri Lanka: Costs, Tips and Places to See

Sri Lanka occupies a strange space in the backpacking world. People say backpacking in Sri Lanka isn’t as exotic, chaotic, cheap or challenging as in India, and it’s a long way from the Southeast Asia backpacking trail that it’s probably better suited to. While travelling through Sri Lanka I saw similarities with Laos and Myanmar (2 of my favourite countries in Southeast Asia) but Sri Lanka is a pretty unique place, full of friendly people, interesting food (I’d never eaten Sri Lankan cuisine before I went there) and a huge variety of sights and activities.

Sri Lanka has dealt with its fair share of problems over the last decade, including the Boxing Day Tsunami and a civil war. The war has ended and the waters receded, and everyone I talked to seems hopeful for the future of the country they are so proud of.

There are some excellent beaches in Sri Lanka which attract an eclectic mix of travellers. Most people backpacking in Sri Lanka will spend at least a few days at a beach, which one really depends on your mood. The beach in Hikkaduwa is nice but the town isn’t; it was basically just a stretch of main road which housed a whole lot of guesthouses and restaurants, along with the inevitable traffic. Unawatuna is popular and it was nice, the only problem – the water wasn’t as inviting as most beaches I’ve been to in Asia. Mirissa was my personal favourite, even though I was on my own  (it was definitely the most couple friendly of the beaches I stayed at in Sri Lanka). The East coast apparently has some nice beaches too, but it was rainy season when I was there so I didn’t make it that far. 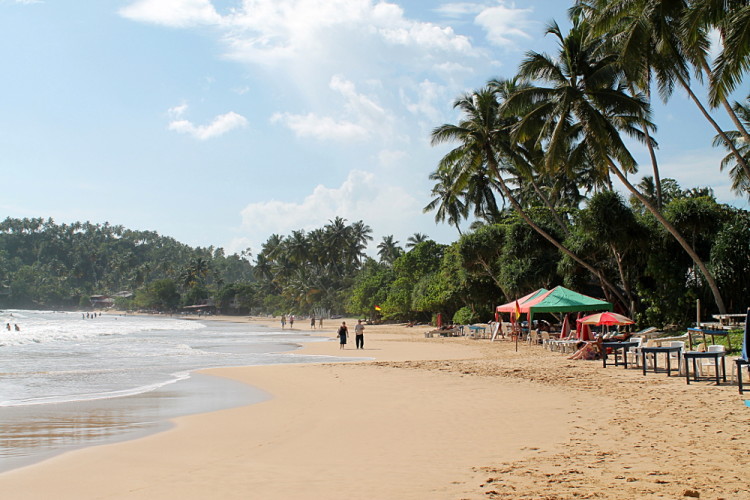 Sri Lanka is home to a few amazing ancient wonders, the most impressive being the Lion Rock in Sigiriya. It was a fortress for a flawed king, and while there isn’t much left of the buildings it’s still a great place to visit (read a full article on the Lion Rock here). Polonarruwa is a former capital where you’ll see some well preserved ruins as well as bats flying through the sky at sunset. There are also some cave temples in Dambulla which were a bit disappointing, and the colonial cities of Galle and Nuwara Eliya.  Galle has an old Portuguese fort and is a nice place to wander (read a full post here), and Nuwara Eliya is a “More British than Britain” hill station full of old villas and tea fields. Kandy, Sri Lanka’s second biggest city, has some interesting historical elements, including the famous Temple of the (Buddha) Tooth, but it’s not the most likeable of towns. 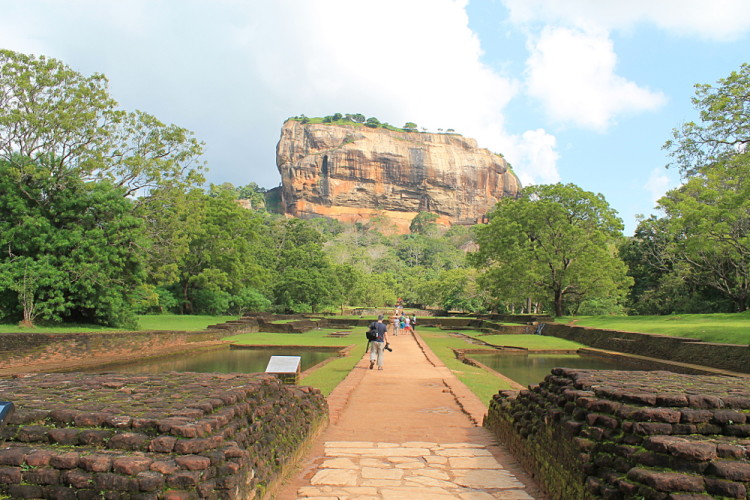 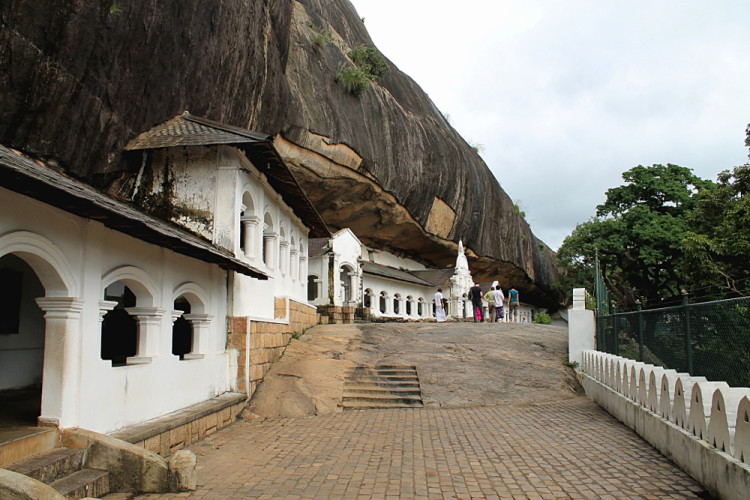 If you’re into wildlife then you’ll love backpacking in Sri Lanka.  There are lots of national parks where you can go on an African style safari, with Yala National Park probably being the most well known. Yala is famous for its leopards and I saw 2 of them during my visit. I also saw elephants, jackals, crocodiles and lots of monkeys, and while it isn’t that cheap (I paid around Rs 5000 or $40 USD for a half day tour) it’s definitely worth it.

I also went whale watching in Mirissa, which was an awesome yet scary experience. The sea was angry that day and we seemed to be out there for ages looking for whales. I eventually saw some, although the water was too rough for me to get any photos. 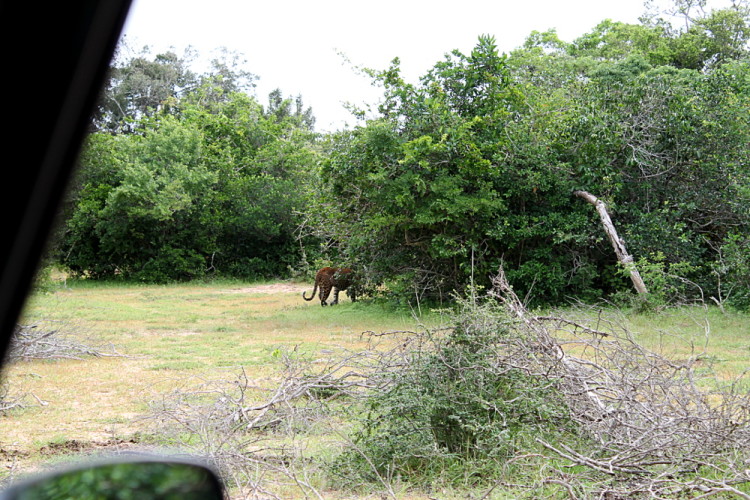 One of the first articles I wrote on this website was about Sri Lanka’s hill country, and it remains one of my favourite places in Asia. The scenery is a mix of tea fields, mountains and waterfalls, and although it seems to rain a lot I’d recommend spending a good chunk of your Sri Lankan odyssey exploring the area. Ella is probably the best place to base yourself, but check out Haputale and Nuwara Eliya as well. Read a full post on the hill country here. 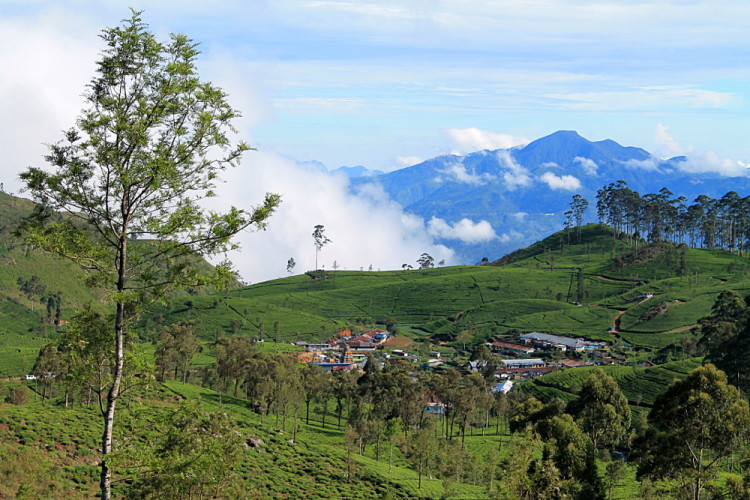 If you’re coming from India or Southeast Asia you might find the prices high, but only really in Colombo (Negombo), Kandy and the popular beaches. It was hard to find any rooms for under Rs 2000 ($15 USD) in those places, but once you get out into the rest of the country you’ll easily find nice rooms for between Rs 1000 – 1500. I mostly stayed in small family run guesthouses which were always clean, friendly and great value.

Buses and trains in Sri Lanka are really cheap, but good luck getting a seat as they are always full. I had to stand up more than I have in any other country, so if comfort is important to you it might be a good idea to hire a driver. As I’m a bit of a masochist (and tight with my money) I never did, but I talked to a lot of people who had and they said it was well worth it. If you have a few people together you should consider it, but try and take some local buses and trains as well.

It’s expensive to go to tourist sites in Sri Lanka, but once you’re inside you quickly forget about your unhappy wallet. The Lion Rock (Sigirya) costs $35 USD, Polonarruwa was $25 and the cave temples in Dambulla were around $12. I spent 2 and a half weeks in Sri Lanka and spent about $600 USD, a little over my Southeast Asia budget but still pretty cheap considering all the places I went.

You might be wondering why I haven’t mentioned Colombo, by far the biggest city in Sri Lanka. I only spent a couple of hours in Colombo, and most of that was spent at the station waiting for a train. A lot of people (myself included) go straight from the airport to Negombo, a beach side town which is million miles from the bustle of the city, but within an hour drive. I kind of wish I spent more time in Colombo, but I’m sure I’ll be back.

Have you been backpacking in Sri Lanka? Let me know if I missed any must see places!

The Best Walks in Singapore: From the Forest to the City
← Previous
How to Get (And Keep) a Comfortable Seat on a Crowded Bus
Next →
Click here to cancel reply.

Great article, Srilanka looks so beautiful and fun to visit.Loved those photos as well as nice and complete guide, worth reading.On my bucket list looking to explore Srilanka someday.Bookmarked you to see more such beautiful destinations.

Thanks Monica, Sri Lanka is awesome!

Great informative article! I am travelling around Sri Lanka at the moment and am so in love with this country! I didn't get round to doing Yala but I did do the elephant safari in Udawalawe and oh my...IT WAS INCREDIBLE! If you do find yourself back here you must go. I saw around 40-50 elephants, some which were a metre away from me.

Thanks Soph, that's definitely a place I'll go when I'm next in Sri Lanka. I was only there for around two week and missed heaps of places, it's on the "return to" list!

Hi Jon, Thanks for this excellent summary! I am heading for 11 days to Sri Lanka (I know it's really short, but couldn't find more time) on very short notice (bought the plane ticket yesterday night and we leave in 4 days) and that gives a very good first hand overview. A few questions: * Train: do you need to book or just go to the train station and leave? * Wildlife: you write you saw leopards? How many tours did you do? Thanks again Cheers, Gilles

Hi there, looks like you had a nice time. And a very complete article. I'm thinking about going to Sri Lanka especially for the wildlife. I'm on a budget and know the national parks are expensive. With your budget, how many parks have you visited besides Yala and the whale watching trip?

Hey Walter, I only visited those 2, only had around 2 weeks in the country. There are a lot more though and they weren't that expensive, especially considering the animals you see.

Sri Lanka looks awesome! I would definitely visit there, but you'd have hard time getting me to go to India..I would love to visit some tea plantations in Sri Lanka too. I can't believe you actually saw leopards, that's so cool!

Cheers Annika - I think a lot of people are worried about India, Sri Lanka is great as an alternative though! 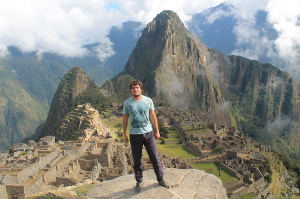