Chiang Saen and the Golden Triangle: Off the Beaten Path in Northern Thailand

The Northern Thailand tourist trail mostly consists of Chiang Mai, Chiang Rai and Pai, but look a little further and you’ll find heaps to explore. Chiang Saen, and the nearby Golden Triangle, is in the far north of the country and is close to the borders with Laos and Myanmar. I journeyed there on my recent trip to Thailand – I’ll show you some of the best things to do in Chiang Saen and the Golden Triangle and give you some tips on how to do it.

From Chiang Rai it takes around three hours to reach Chiang Saen by bus. Just head to the bus station in Chiang Rai and you’ll easily see where to go. From memory the bus cost about 35 baht (around $1.50 USD).

Things to Do in Chiang Saen

The best things to do in Chiang Saen mostly consist of seeing the ruins that are scattered around town. The Mekong River area is nice too and if you’re lucky you’ll visit when there’s a night market on. 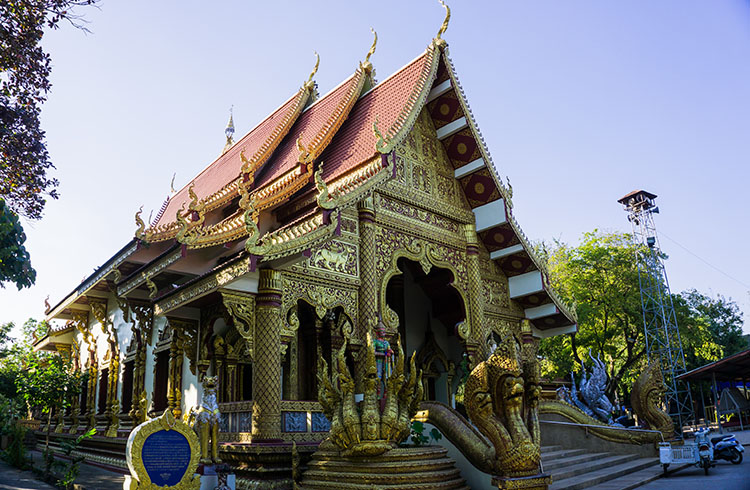 I spent a fun afternoon in Chiang Saen walking around the ruins, most of which date back to around 14th and 15th centuries. Most of the best ones are on or close to the main street and are a short walk from the bus station. The first few that I saw were small and only took a few minutes to walk around. Highlights included Wat Phra That Chedi Luang and Wat Phra Yuen. 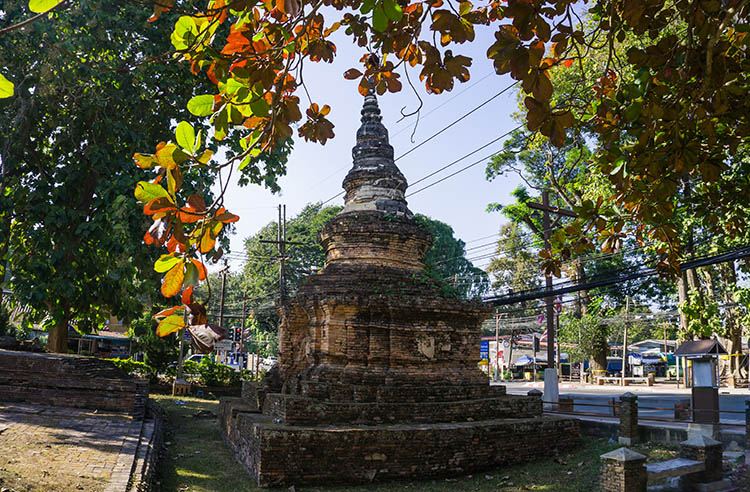 All of these temples are free and all were completely deserted. Sure, they aren’t as impressive as similar sites in Ayutthaya, Lopburi and Sukhothai, but there’s something to be said for having places like these to yourself. 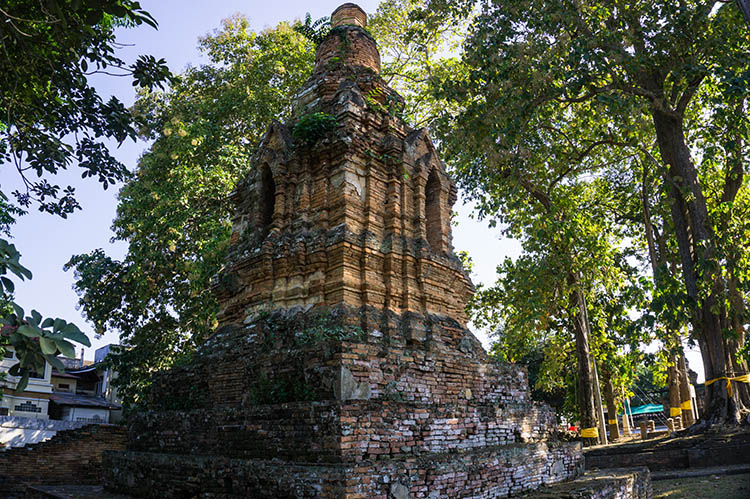 There’s a small museum (Chiang Saen National Musuem) which is worth a look if you’re into that kinda thing. I debated whether to part with the 100 baht but eventually gave in. It was alright – there are a few relics from Chiang Saen’s prime and some interesting displays about the hill tribes found in the area. 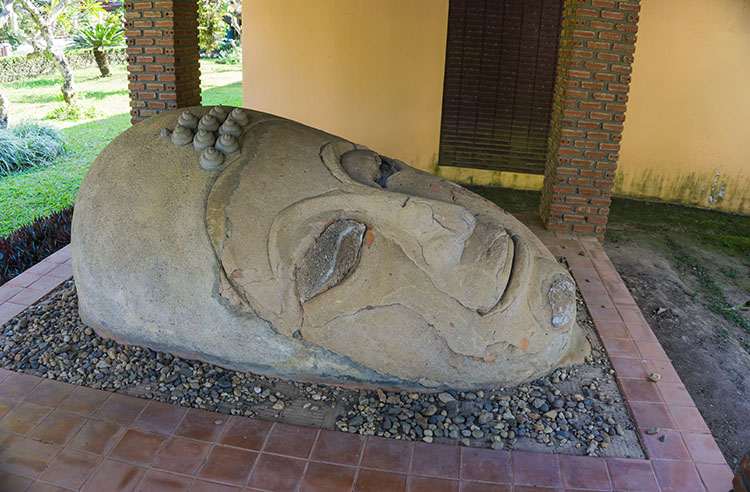 From there I walked towards the old city walls to Wat Pa Sak, the most interesting temple in Chiang Saen. I ended up going the wrong way, but I got some nice views of the city walls and eventually ended up at the temple. 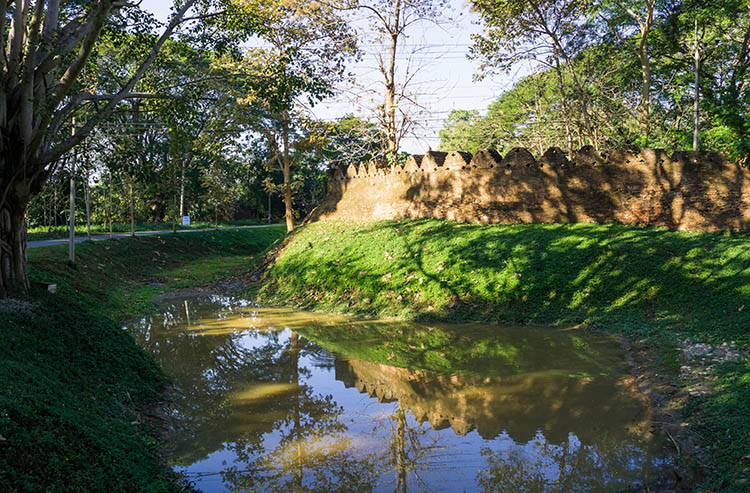 After arming myself with a stick to warn off the aggressive local dogs, I climbed over a small fence and started exploring the ruins. This site must have been huge at some point but it’s mostly in ruins now. Wat Pa Sak itself has been perfectly restored and is by far the most impressive temple I saw in the region. Again, I had it all to myself – so peaceful! 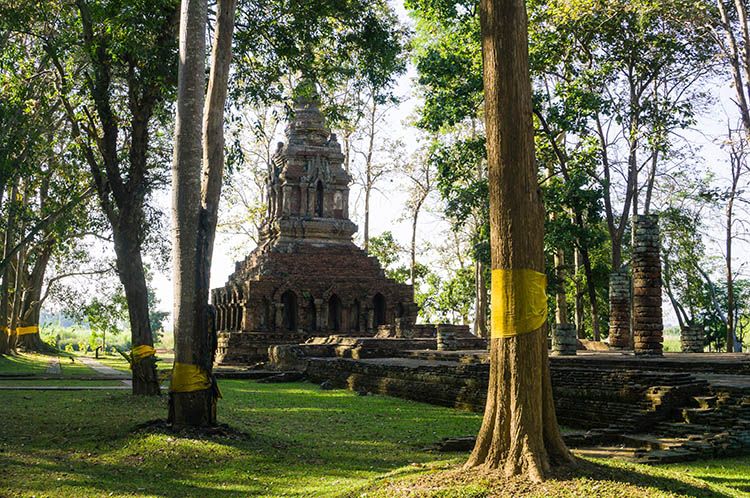 On my way out I walked past a ticket office housing a confused looking woman. It turns out I missed the front entrance all together – fence jumping sometimes has its perks! I did end up paying the 50 baht though, and all was well. There are more temples in and around Chiang Saen — I thought about going to some of the further out ones that apparently have river views, but I figured I’d get enough river views at the Golden Triangle (and I was right).

Chiang Saen sits right next to the Mekong River and is an important trading post. To be honest, there isn’t a lot to see down by the river, but if you time it right (pretty sure it’s Thursdays and Saturdays) there’ll be a massive night market. There’s all sorts of food on offer and it’s very much aimed at locals. In a crowd of hundreds (maybe thousands) I only a handful of western tourists. 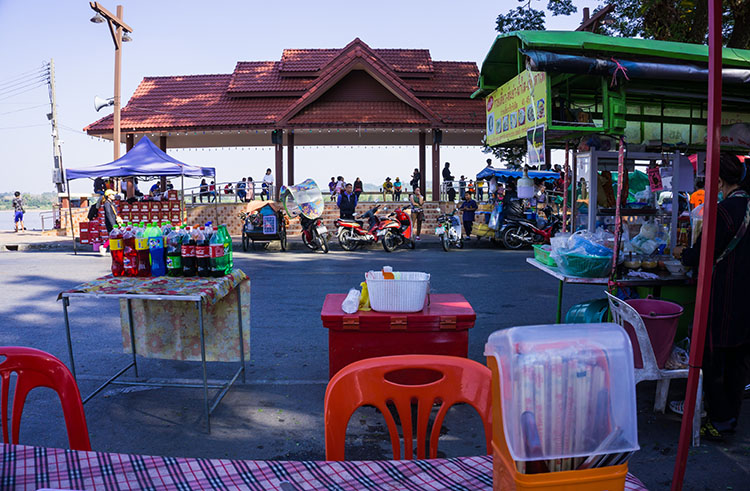 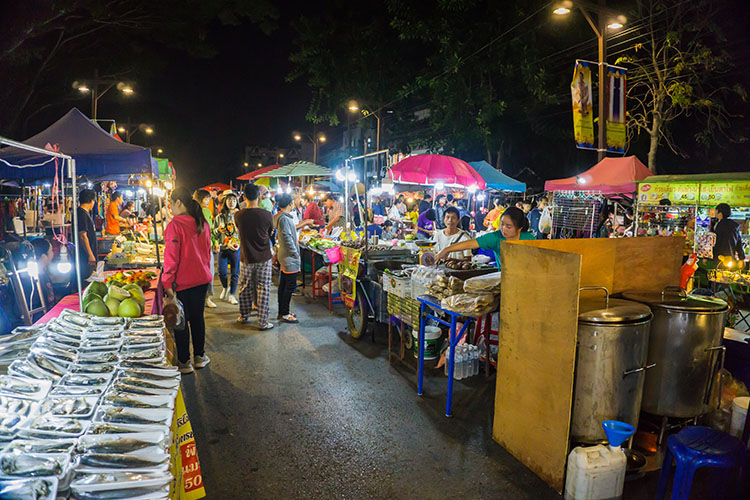 Where to Stay in Chiang Saen

There are a few hotels on the streets close to the river and bus station – you shouldn’t have to walk far wherever you choose. I went for Tata Hostel as it was cheap and had good reviews on Booking.com. It turned out to be a good decision. It was central enough to everything, the owner was really friendly and the room was good for the price.

Getting to the Golden Triangle

Songthaews travel the short distance between Chiang Saen and the Golden triangle. They cost 10 baht and you can catch them on the main street (close to where the bus from Chiang Rai dropped you off). If you have any trouble just ask a local – it’s a popular route. It should take around 15 minutes. You can also take a boat tour if you’d prefer to get out onto the Mekong River. 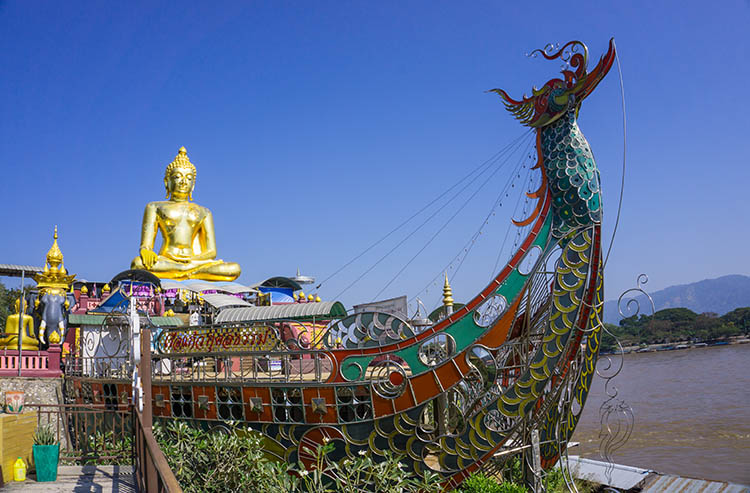 You’ve probably heard of the Golden Triangle. It was once notorious for being the centre of opium / heroin production in Southeast Asia. The border area with Laos and Myanmar was once pretty lawless, but that’s all well in the past. These days it attracts a decent number of tourists, although, honestly, there isn’t that much to see there. There are a few temples in town which are worth a look. Wat Prathat Pukhaw is up the hill from town. Keep walking from there and you’ll come to a viewpoint overlooking the river. From there you can see three countries – Thailand, Laos and Myanmar.

The other popular thing to do at the Golden Triangle is to visit an opium museum. I walked the two kilometres to the Hall of Opium, a huge, flash museum which tells you everything you never knew you needed to know about opium. It’s more interesting than it sounds, and there are also displays detailing other aspects of life in the far north of Thailand. A ticket will set you back 200 baht. I’m not entirely sure it was worth walking there in the intense midday sun, but you could organise transport if you need to.

And that’s pretty much it. After a meal in one of the restaurants by the river I headed back to Chiang Saen. You only need a few hours to visit the Golden Triangle, but you can stay the night if you want as there are a few hotels in the area.

Other things to do in Northern Thailand

If you’re visiting Northern Thailand, you’ll almost definitely end up in Chiang Mai. It’s a nice city with some great day trip options, including Doi Inthanon, the tallest mountain in Thailand. Chiang Rai is also worth a visit, especially if you visit Phu Chi Fa for a spectacular sunrise. 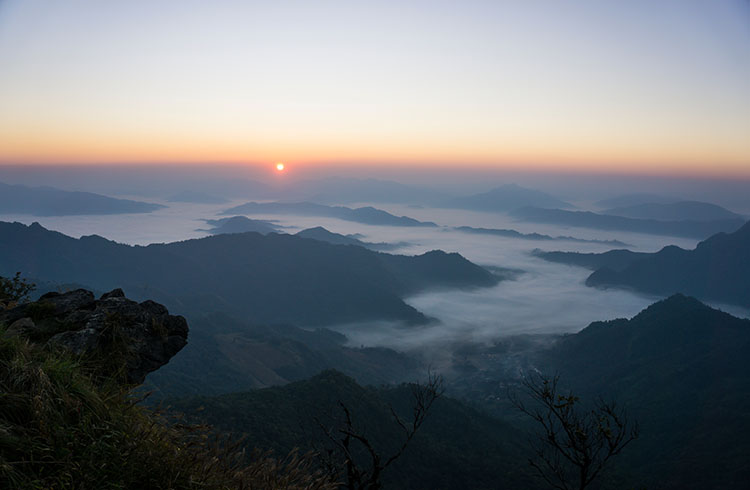 Are you planning a trip to Chiang Saen and the Golden Triangle? Let me know in the comments below!

10 PS4 Games to Play if You Miss Travelling

Chiang Saen and the Golden Triangle: Off the Beaten Path in Northern Thailand